Thank you for your letter to the National Statistician about renewable electricity in Scotland. I am responding as Chair of the UK Statistics Authority. You asked us to consider a claim by the Scottish National Party that almost all of Scotland’s electricity needs are met by renewable generation.

As you say, this claim has been challenged by fact-checking organisations. Subsequently, the First Minister has identified this as an error and provided a correction to a speech made in the Scottish Parliament on 29 September. The corrected text reads “Under this Government, the equivalent of 98.8% of our gross electricity consumption is already provided by renewable energy sources. [emphasis added].” It is always welcome when elected representatives correct or clarify their use of official statistics, especially when, as in this case, the figure represents a complex mixture of different statistics.

In 2020, 51,865 GWh (gigawatt hours) of electricity was generated in Scotland, of which 32,121 GWh was from renewable sources such as wind, solar, and hydroelectric. Electricity is transferred between Scotland and England through the National Grid and to Northern Ireland though undersea cables, and the direction of these transfers varies hour by hour according to supply and demand across Great Britain. In 2020, this resulted in a net transfer of 19,347 GWh out of Scotland2. Therefore, gross electricity consumption in Scotland (electricity generated less net transfers) was 32,518 GWh, or approximately equal to renewable generation.

The Scottish Government’s target to have the equivalent of Scotland’s whole electricity demand generated by renewable sources is further explained on its Scottish Energy Statistics Hub. The accompanying commentary states that “this does not mean that Scotland would be fully dependent on renewables generation, but rather that renewables would form the key part of the overall electricity mix.” The portal provides the following diagram to explain the calculation of the target measure: 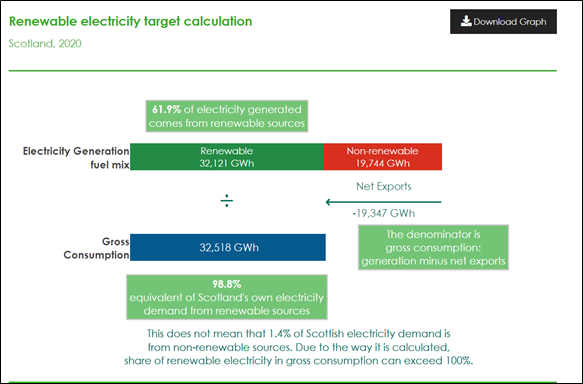 Where statements are made in public debate it should be clear what the underlying statistics measure, to avoid misinterpretation. We have asked the Chief Statistician in Scotland to ensure that the First Minister’s office is briefed on this matter.