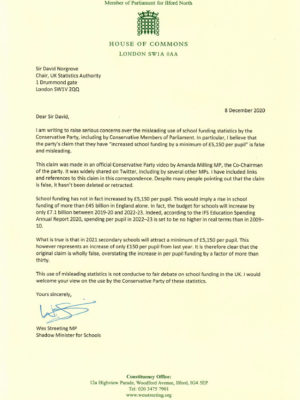 I am writing to raise serious concerns over the misleading use of school funding statistics by the Conservative Party, including by Conservative Members of Parliament. In particular, I believe that the party’s claim that they have “increased school funding by a minimum of £5,150 per pupil” is false and misleading.

This claim was made in an official Conservative Party video by Amanda Milling MP, the Co-Chairman of the party. It was widely shared on Twitter, including by sever other MPs. I have included links and references to this claim in this correspondence. Despite many people pointing out that the claim is false, it hasn’t been deleted or retracted.

What is true is that in 2021 secondary schools will attract a minimum of £5,150 per pupil. This however represents an increase of only £150 per pupil from last year. It is therefore clear that the original claim is wholly false, overstating the increase in per pupil funding by a factor of more than thirty.

This use of misleading statistics is not conducive to fair debate on school funding in the UK. I would welcome your view on the use by the Conservative Party of these statistics.