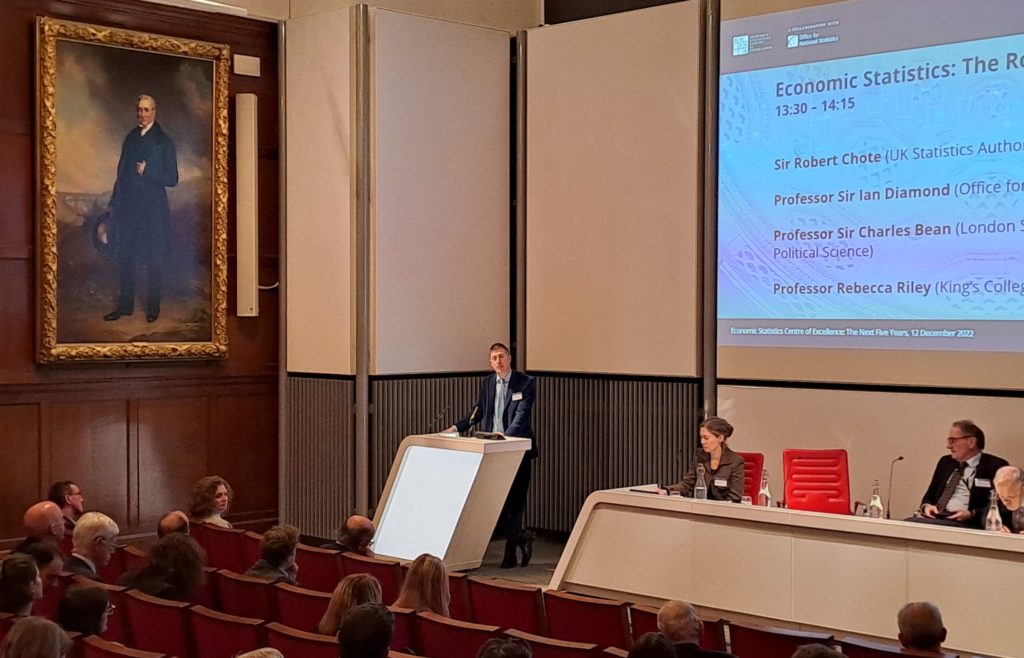 Authority Chair, Sir Robert Chote, recently gave a speech at an event to launch the next five years of the Economic Statistics Centre of Excellence (ESCoE). Touching on the origins of the Centre, its successes and expectations for the future, he said the following:

It is a great pleasure to be here and to have the opportunity to help celebrate the first five years of ESCoE and to launch the second. It is a particular pleasure to do so in such august company:

I have been asked to kick off proceedings by providing some brief background to the creation of the Centre and where it might contribute to some of the ongoing and emerging issues confronting the statistical system.

As I mentioned, the origins of the Centre go back to the review of economic statistics that George Osborne commissioned as Chancellor in 2015 and which Charlie kindly chaired. The purpose of the review was to look at how well the ONS was performing in measuring the rapidly evolving modern economy and to make recommendations for how it could do that better.

Judging from the conversations that I have had with stakeholders since becoming the chair of the Authority – and indeed when I was deciding whether to apply – the ONS has responded impressively to Charlie’s challenges, although there is more still to do – and doubtless always will be.

Responding to the review, the ONS fundamentally reviewed many of its internal and external processes. In addition to looking to move to double deflation for the National Accounts and placing a greater focus on deflators and the role of technology, the ONS invested in new surveys and made greater use of administrative data (such as using VAT data in the construction of the National Accounts). It developed Faster Indicators, including monthly GDP, and new techniques through the Data Science Campus.

In addition, the ONS re-booted its engagement with the academic community. It did so in a number of ways, including the appointment of ONS Fellows and the creation of the Economic Experts Working Group. But the most significant was the establishment of the Economic Statistics Centre of Excellence in 2017, hosted initially by NIESR and directed then as now by Rebecca.

The ambition was not just to bring about a step-change in the quantity and quality of research into economic measurement, which had become a relatively neglected field, but also:

I know that the ONS was delighted with the way in which ESCoE rose to this ambition and rapidly found its feet.

As the Centre moves into its second five years, now hosted at King’s, there are a number of areas in which its work is likely to contribute to the developing work of the statistical system here and abroad. For example:

Of course, if the last five years have taught us anything it is that unexpected challenges and demands can confront statistical systems out of the blue – as the pandemic, the inflationary consequences of the Ukraine crisis and the recent evolution of the labour market demonstrate. Like the ONS and the GSS more broadly, ESCoE will I am sure be nimble and imaginative in rising to these challenges and opportunities to the benefit both of the official statistical system and academic researchers, to the ultimate benefit of the public good. And I wish you all the best in doing that.