The purpose of this paper is to present the proposed variability target for the 2021 Census.

One of the Census quality targets for 2021 is reduced variability in response rates across Local Authorities (LA) and within Hard-to-Count (HtC) groups. The HtC index is constructed using an area level (Lower Super Output Area – LSOA) model that predicts non-response by day 10 after Census Day (Dini, 2018). Each LSOA is assigned a score from 1 to 5, with 1 being easiest and 5 hardest to enumerate.

For this reason, we need a quantifiable approach to track our progress against the quality target of reduced variability. During the 2011 operations the method used was that 90% of LSOAs fall within 10 percentage points (hereby referred to as pp) of the mean response rate for that Local Authority, and Hard-to-Count group.

A retrospective analysis was performed to evaluate if the 10pp target was met in 2011, and if a more ambitious goal is feasible to aim for in the 2021 Census – 90% of LSOAs falling within 10% target range of the mean response rate. Alternative targets were also investigated as possible variability goals for 2021.

It is also important to mention that our predictions for the response rates for the 2021 Census are more uncertain than for 2011 due to the online-first approach. The online-first Census could lead to higher variability; therefore, it is important to choose a target that is not overly stretching in case the variability behaves differently than in 2011.

The proposed idea is to use a similar but more challenging method to the one used during the 2011 operations – 90% of Lower Super Output Areas (LSOA) should fall within 10% of the mean response rate for that Local Authority, and Hard-to-Count group.

The boxplot below shows the distribution of LSOA response rates within each HtC group in 2011­­­­­. A general trend of increased variability can be observed as willingness to respond decreases. 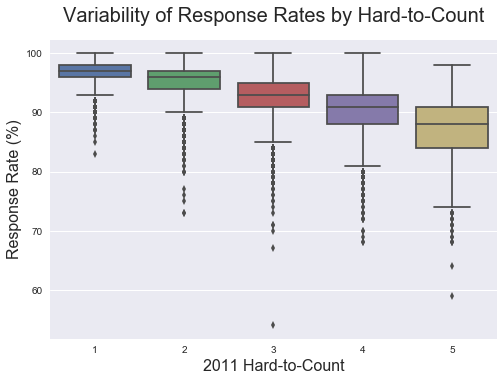 Proportion of LSOAs that were witin the 10/5 variability target.

Similar analysis on the variability of LSOA response rates within Local Authorities showed that all but the 5pp/5% targets were met in 2011.

Proportion of LAs that were within the 10/5 variability target.

FPA is a tool designed by Census Statistical Design team with the aim of reducing variability (Meirinhos, 2019). Its goal is to reduce variability between and within HtC groups in each Team Leader Area (an area where Census Officers have agreed to work in). It works by targeting the worst performing Output Areas and giving them priority of field visits, and giving no visit priority to the best performing areas.

Regardless of which variability target will be decided for the 2021 Census, we won’t stop reducing variability with FPA just because we have reached that target. We will continue to target the areas with the lowest return rates throughout the operational period – even if we don’t decide for more demanding targets, we might reach them because of the FPA.

Despite the variability goal being easier to achieve for the easier-to-count areas, the FPA will work continuously to minimise variability. It is feasible to set harder to achieve goals for the FPA, as there is no downside to having a more challenging target in the FPA (as long as it’s not extremely difficult because that would work at the expense of maximising response).

Throughout the operational period, we will undertake different actions to minimise variability in 4 phases, and to evaluate how we are performing against our variability targets:

The variability target is used for reporting and as an objective measure of variability – it will not be used to guide the field behaviour. It works separately to the FPA, which will directly influence the field activities.

In summary, the 2011 target should be an acceptable minimum target. Variability is very important, but we want it to be achievable. We propose that the 10% variability goal should be used in 2021. This goal is sufficient to meet statistical requirements as agreed with the Methodology team. It is more operationally feasible than the 8 and 5 pp/% targets, but more challenging than the 10pp target used in the 2011. The 9% goal was met in 2011, however, due to some uncertainty of the online-first nature of 2021 Census it might be more challenging to meet that goal in 2021. Finally, regardless of the target chosen, the FPA will not stop reducing variability during live operations, even if the variability target was met.