I write in response to the Business, Energy and Industrial Strategy Committee’s call for evidence for its inquiry, ‘post-pandemic economic growth: UK labour markets’.

As the Committee will be aware, the Office for National Statistics (ONS) is the UK’s National Statistical Institute and largest producer of official statistics. This inquiry is of particular interest and relevance to us as we are responsible for producing employment and labour market statistics and analysis for the UK.

We have focussed our written evidence submission on our most recent statistical analysis of skills in the current labour market, which are most and least prevalent, and how this has changed because of the coronavirus pandemic. We have also provided analysis of changes in employment contracts and working patterns, and of the impact of an ageing population of the labour market and sectoral productivity.

I hope this is useful, and I look forward to discussing this with the Committee in person on 19 July.

The state of play in the UK labour market post EU Exit and the impact of the COVID-19 pandemic on recruitment, skills shortages, and the growth of the labour market

Do we have enough workers with the right skills in the right places?

Which sectors are experiencing the most acute shortages of workers since the pandemic?

What impact has the UK’s departure from the EU had on the flow of workers into and out of the UK? Are there particular sectors or skill sets that are most impacted?

To what extent is long covid contributing to economic inactivity due to long-term levels of sickness absence and early retirement?

How are working patterns changing in the UK? To what extent is the gig economy growing and permanent full-time employment contracts in decline?

How have employee demands and employer offers of flexible working been affected by the pandemic?

The impact of an ageing population on the labour market

What impact is the ageing population already having on employment rates and labour productivity? 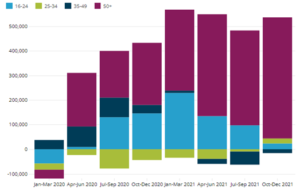 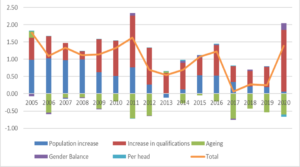 How is the UK’s ageing population exacerbating the labour shortage that can already be felt in some sectors, e.g., hospitality, hair and beauty, social care?

Figure 3: Total change of workers aged 50 to 70 years flowing into economic inactivity by occupation, between April to June and July to September, UK, 2021 compared with 2019