I write in response to the Business, Energy and Industrial Strategy Committee’s call for evidence for its inquiry Supporting Regional Investment and Growth.

The range of statistics and analyses published by ONS on regional and sub-regional productivity allows us to explore the differences in economic performance between different regions in the UK.

This note summarises some key findings that have emerged from analysis of existing evidence.

I hope the Committee finds this evidence to be of use. Please do not hesitate to contact me if I can be of any further assistance.

1. Labour productivity is unevenly distributed across the UK, with significant differences across and within different regions. The majority of high productivity areas are in London and the South East region, while predominantly rural areas in England and Wales are among the areas with the lowest productivity levels.

3. Spatial concentration of employees within Great Britain is seen most prominently within knowledge-intensive industries such as information and communication; and professional, scientific  and technical activities. The manufacturing industry displays a more varied spatial distribution of jobs.

5. Public sector revenue for the FYE 2018 on a per-head basis was highest in London and lowest in wales. London also raised the highest revenue on a population-share basis and on a geographic-share basis.

6. London and the South East region have the lowest net fiscal balance for FYE 2018, and the North West region has the highest. This is a continued trend from FYE 2016.

7. ONS regional and sub-regional productivity estimates show that economic performance in terms of labour productivity, which is measured as Gross Value Added (GVA) per hour worked, GVA per job or GVA per employment, is not evenly spread across the UK. There are significant differences in aggregate average labour productivity between and within different regions and countries of the UK. For example, productivity in Tower Hamlets in London is around 2.5 times higher than productivity in the rural area of Powys in Wales.

8. However, there is a skewed distribution of labour productivity across the nation. Figure 1 below shows that 15 out of 17 very high productivity areas are located either in London or west of London along the M4 corridor in the South East region, while predominantly rural areas in England and Wales were among the areas with the lowest levels of labour productivity in 2017. The data also highlight that many subregions (at Nomenclature of Territorial Units for Statistics (NUTS) 3 level) of the UK have very similar productivity levels to each other. 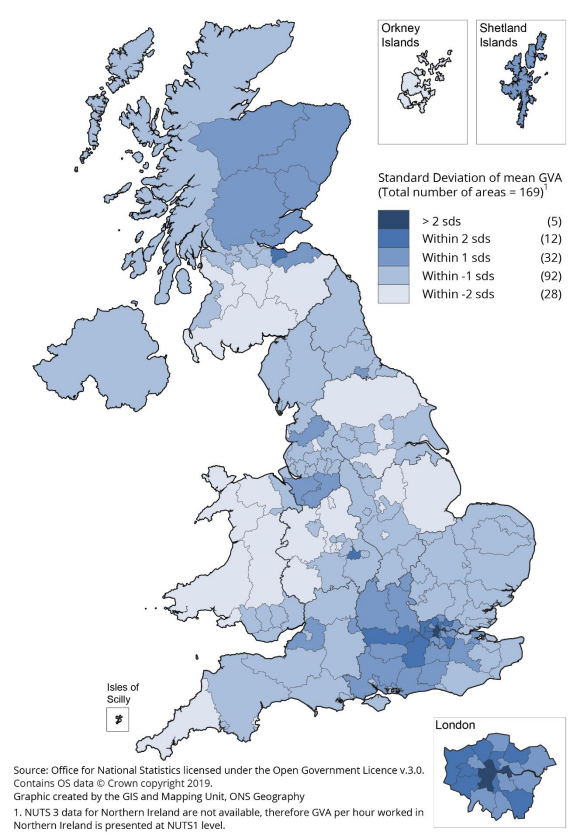 12. ONS also investigated the factors that are associated with firm-level productivity in more detail. Particularly focussing on examining and contrasting factors that are internal to firms with those that are external and associated with location. While obtaining conclusive evidence is difficult, the available evidence suggests that while there are some important internal factors influencing firm-level productivities, such as the ownership of a firm and whether it trades internationally, it is also the case that to understand the larger geographical differences, for example, between London and other areas of the UK, focus also must be placed on external geographical factors.

13. Such a focus on external factors recognises that each firm operates in its own locale with, for example, a specific mix of local product and factor markets, local infrastructure, agglomeration benefits, firm competition, consumer tastes and local spending power. These factors can affect firm-level productivities and ultimately average productivity in an area.

15. Within Great Britain, a spatial concentration of employees is seen particularly in some of the relatively high productivity knowledge-intensive service industries such as information and communication; and professional, scientific and technical activities (also see: The spatial distribution of industries). Employee jobs in these industries are particularly concentrated in London, South East and East of England

18. The manufacturing industry has a more mixed spatial distribution of jobs. Employee jobs in manufacturing are concentrated in the East Midlands, West Midlands, Wales and in the northern
regions of England but virtually absent from London.

23. Public sector expenditure is the total capital and current expenditure (mainly wages and salaries, goods and services, expenditure on fixed capital, but also subsidies, social benefits and other transfers) of central and local government bodies, as well as public corporations.

Statistics published in May 2019 show:

24. When taking into account the population of each country and region, a different picture can be seen for the FYE 2018:

26. Though no definition of expenditure on ‘investment’ exists in this framework, some categories of expenditure can be considered to be related to investment, such as economic affairs and
housing.

27. Table 1 shows data from FYE 2016 to FYE 2018 for expenditure on economic affairs and housing for each NUTS1 country and region – spending in value terms and per head. While most expenditure for both categories in value terms occurs in London and the least in areas such as Northern Ireland and the North East, this is not the case when considering the population of each region. On a per head basis, the lowest expenditure generally occurs in Yorkshire and the Humber for economic affairs, and the South East for housing. Further breakdowns of data are available from the Country and Regional Analysis conducted by HMT. 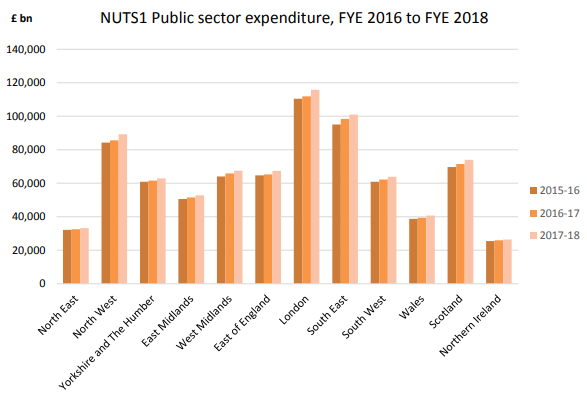 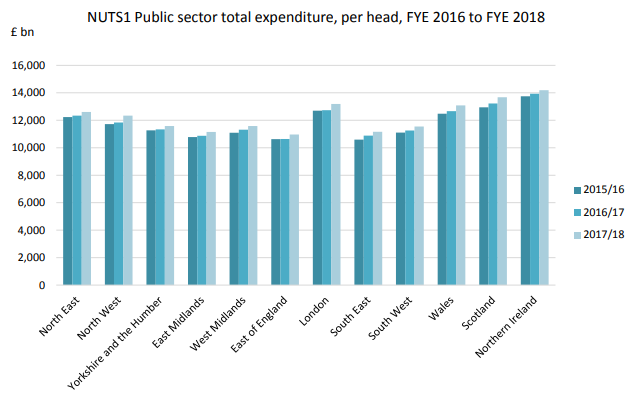 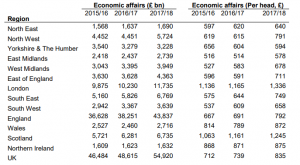 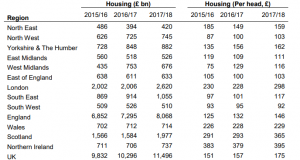 28. For all regions, most expenditure occurs in relation to social protection, namely expenditure on pensions, but also on social benefits. Further information on expenditure for other categories are published alongside the bulletin. 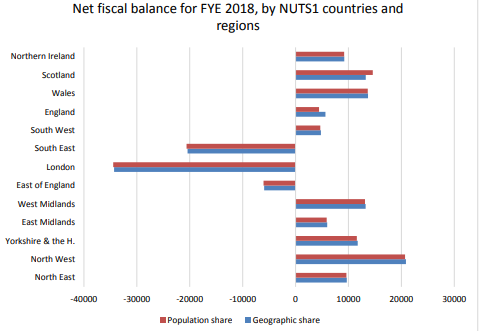 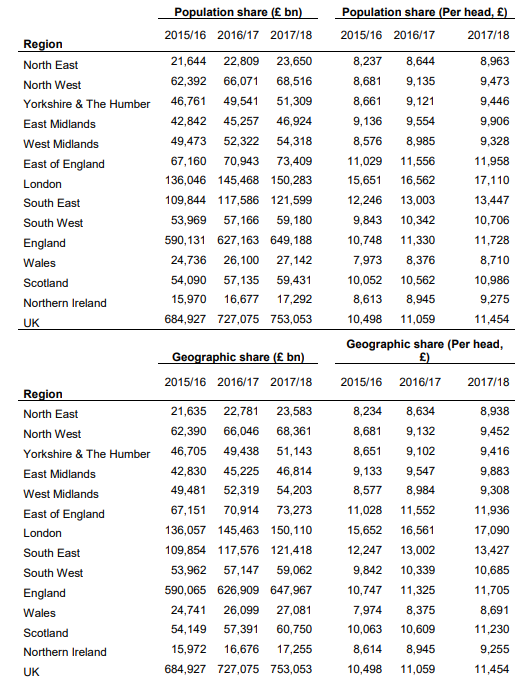 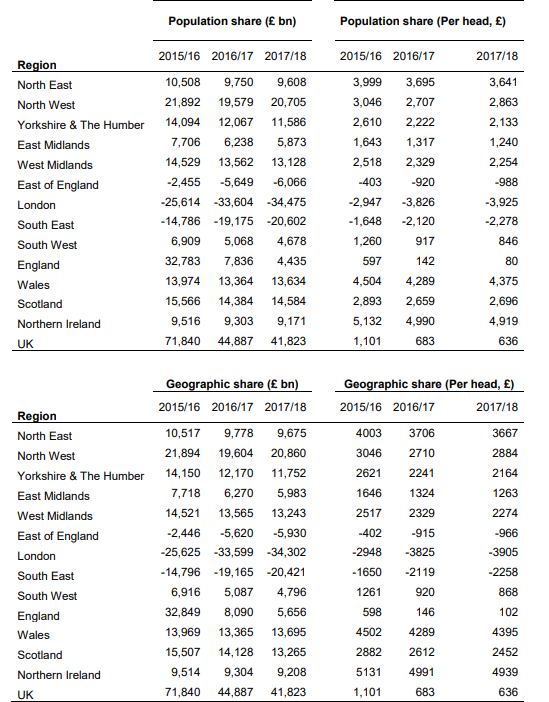 33. Following the Spending Review in 2015, and the Independent Review of UK Economic Statistics by Sir Charles Bean, ONS has conducted several projects under its Devolution programme.
These projects had explicit aims of producing lower geographic breakdowns of statistics, including developments to Regional Accounts; Public Sector Finances; Sub-regional Productivity; estimates of exports of services; and engagement with local area users of statistics. Much of this work has now been completed and published on the ONS website.

34. In support of this programme, ONS created a Centre for Subnational Analysis which has been increasingly engaging with users of statistics. Such engagement included discovery workshops
conducted with the new Mayoral Combined Authorities; meetings with City Regions and City Growth Deals across the UK; presentations at conferences such as the Economic Forums; and the instigation of a new Combined Authorities Liaison Group where we bring users together to show and discuss statistical developments. It has also included direct involvement in the production of Local Industrial Strategies in collaboration with the Department for Business, Energy and Industrial Strategy, meetings with the What Works centres, and engagement with partner organisations including the Local Government Association, Centre for Cities and Core Cities.

35. This engagement has been supported by a continuous programme of work to improve current channels of dissemination, create new insights through forthcoming publications and meet the
specific needs of authorities through targeted support. Bespoke projects have included analysis of productivity to feed into Greater Manchester’s Independent Prosperity Review and of the impacts of building the Midlands Metro, in collaboration with Ordnance Survey. We are currently working to produce analytical articles and ad-hoc data tables which we expect to publish over the coming months in direct response to the needs identified by City Regions through our workshops. Those needs specifically included more information on economic growth, skills, the labour market, productivity and low pay, among other social and economic topics.