Office for National Statistics written response to the Lords Food, Poverty, Health and the Environment Committee’s inquiry of the same name

Dear Lord Krebs,
I write in response to the Food, Poverty, Health and the Environment Committee’s call for evidence.

We aim to provide a firm evidence base for sound decisions, and develop the role of official statistics in democratic debate.

The ONS is responsible for sourcing and reporting UK data for the UN’s Sustainable Development Goal indicators on behalf of the UK Government. The measurement of food insecurity is a requirement for the measurement of Goal 2: Zero Hunger.

The following short note provides details of the available data on food insecurity in the UK and crossgovernment plans to improve these data in the near future.

I hope this evidence is helpful to the Committee. Please do not hesitate to contact me if I can be of any further assistance.

The Office for National Statistics (ONS) – Written Evidence to the Committee on Food, Poverty, Health and the Environment : Food insecurity and sustainability inquiry (October 2019).

The ONS role As the UK’s national statistical institute, the ONS is responsible for the reporting of data which enables regular monitoring of UK progress towards the 244 global Sustainable Development Goal (SDG) indicators. We work with partners across the Government Statistical Service (GSS) to ensure that we can monitor and report on the indicators.

The comprehensive framework for SDGs fits with our Better Statistics, Better Decisions strategy, which sets out the official statistics system collective mission of providing high quality statistics,
analysis and advice to better inform policymaking. Sourcing and analysing data for the SDGs, which covers the economy, environment and society, and is also broken down to show a more complete picture for the UK, will enable better-evidenced policy decisions.

We are:
• Sourcing the appropriate UK data for the global indicators.
• Providing data to the international organisations responsible for each indicator, known as Custodian Agencies, who are responsible for reporting the data to the United Nations.
• Analysing the data so that it can be understood in context.
• Making the data available to everybody through the development of an online tool and supporting reports.

1. The ONS recognises the measurement of food insecurity is a key priority and requirement for indicator 2.1.2 of the UN Sustainable Development Goals (prevalence of moderate or severe food
insecurity in the population, based on the UN Food Insecurity Experience Scale (FIES)).

2. Emma Lewell-Buck MP wrote to Sir David Norgrove, Chair of the UK Statistics Authority, on 30 May 2018 outlining her concerns in relation to the lack of statistical data on food insecurity in the UK. Her Food Insecurity Private Members Bill asked the Government to introduce a reliable and robust measure of UK hunger. At the time, the Bill had secured the support of 150 MPs and 16
Peers.

3. Following this, a meeting of the ONS with Ms Lewell-Buck MP took place. Given the requirement of the SDGs, we started a programme of work to improve UK statistics on food insecurity. This
began with a comprehensive review of relevant existing data from both official and non-official sources. We convened a roundtable on food insecurity with key third sector and government stakeholders in early 2019 to fully understand all the data requirements before determining next steps. We also partnered with the Food and Agricultrual Organization of the UN (FAO) to better understand the different international measurement approaches.

4. In June 2019, the UN (FAO) published the latest version of its annual report entitled ‘The state of Food Insecurity and Nutrition in the World’. The Gallup World Poll was used to collect data for this report, which included a detailed methodology for the UK data. The data collected was used to produce baseline country estimates for the Food Insecurity Experience Scale (FIES) for more
than 140 countries, including the UK. A detailed methodology for the UK data included was also published alongside the report.
5. The Gallup World Poll surveys at least 1,000 individuals using a telephone interviewing method in the UK.

6. The biennial Food and You Survey, commissioned by the Food Standards Agency (FSA), collects information about the public’s reported behaviours, attitudes and knowledge relating to food safety and food issues. Wave 5 of the survey was conducted in 2018 and consisted of 2,241 interviews from a representative sample of adults aged 16 and over across England, Wales and Northern
Ireland (not Scotland). In line with 2016, the 2018 survey incorporated a suite of 10 food insecurity questions used by the United States Department of Agriculture Economic Research Service in
their annual, nationally representative survey monitoring the extent of food insecurity in the U.S.

8. The following graph shows that 4% of respondents lived in households with very low food security in 2018. There has not been a statistically significant increase compared with 2016. 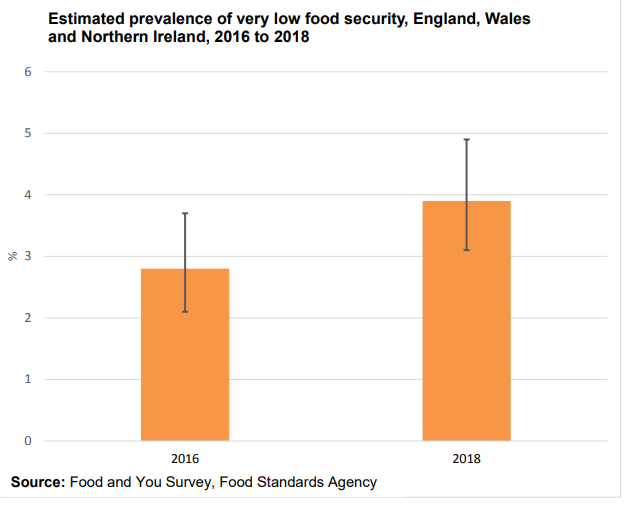 10. Combined analyses of the 2017 and 2018 Scottish Health Surveys showed that worrying about running out of food was more prevalent among single parents (25%), single adults aged under 65
living alone (21%) and adults living in the most deprived areas (16%). These analyses also showed that adults experiencing food insecurity had substantially lower mental wellbeing and were more likely to have consumed no fruit and vegetables on a given day than the rest of the adult population.

11. The prevalence of food insecurity in Scotland will continue to be monitored in the 2019 Scottish Health Survey. Data from the 2019 Scottish Health Survey will be published in September 2020.
Thereafter food insecurity in Scotland will be monitored in the UK-wide Family Resources Survey.

Why are we working to improve the data?

12. While existing official data are available, the aforementioned evidence points to limitations in its ability to appropriately report progress towards the SDGs. We promised to consider ways the ONS can improve official statistics on food insecurity for the UK.

13. The UN (FAO) data collection has now been discontinued, due to the FAO expecting countries to collect and report their own national survey data.

14. Both the Gallup World poll for the UN (FAO) and the Food and You survey have limited sample sizes of 1000 individuals and 3000 adults respectively. This means the findings lack statistical
robustness and reliability. It also limits our ability to identify characteristics that are associated with food insecurity, which goes against our commitment to ‘leave no one behind’.

15. The Food and You survey is only collected once every two years and lacks UK wide coverage as it does not report data for Scotland.

16. During our roundtable with key third sector and government stakeholders, the Department for Work and Pensions (DWP) confirmed they would include food insecurity questions on the Family Resources Survey (FRS) from April 2019. This development was strongly welcomed by all stakeholders.

17. The FRS questions follow the same general format as those already used in the United States and Canada to measure food insecurity (the questions are available at Annex A).

18. The FRS has a sample of 20,000 households, that is designed to be representative of the UK.

19. Data from these questions is now being collected. The current survey year ends in March 2020 and we would expect DWP to publish the first set of results by end March 2021, subject to quality
assurance. These will be on a UK basis; the level of detail of results will depend on the level of actual response. The ONS will work with DWP to ensure that, as far as the data allows, the reporting requirements of the SDGs are met by the results from the FRS.

20. We have committed to a further roundtable to keep stakeholders abreast of developments. This is scheduled for November 2019.

What are the benefits of this new method for food insecurity data collection?

21. The summary table below identifies the benefits the FRS will offer in respect of food insecurity measurement compared with the Food and You Survey and the UN FAO statistics currently collected using the Gallup World Poll. By having UK-wide coverage and a much larger sample size the data will be much more reliable and statistically robust. Furthermore, it will enable the reporting of more characteristics associated with food security, helping to fulfil our commitment to leave no one behind.

22. The new food insecurity questions on the FRS are undergoing thorough checks to ensure they meet the required high quality standards. Assuming these standards are met, the new FRS data
will be available from 2021. Until these data are available, we will continue to report progress towards SDG indicator 2.1.2 using data for the Food and You Survey. All data are published and
available to all via our National Reporting Platform (NRP). 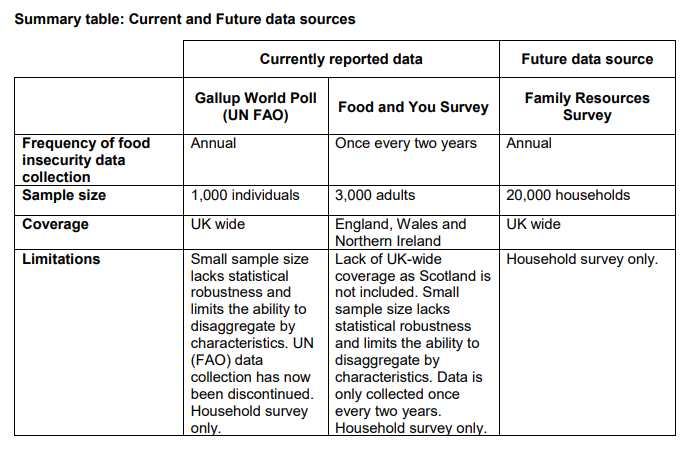 Annex A: Food insecurity questions to be asked on the Family Resources Survey 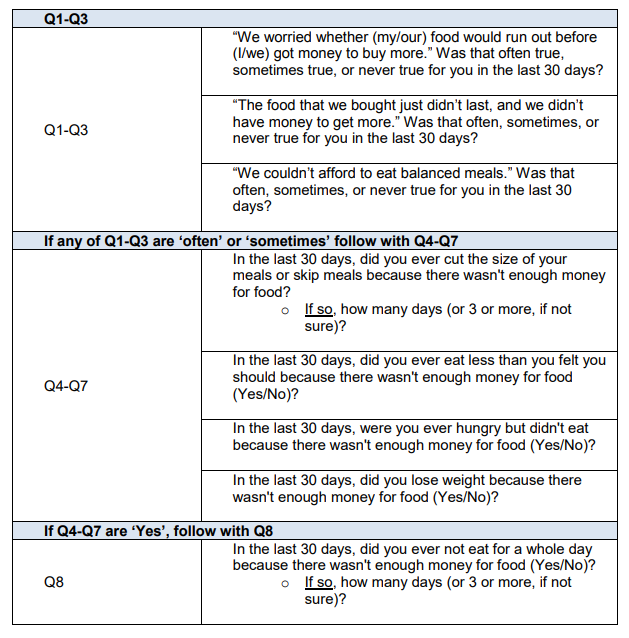