Office for National Statistics written evidence to the Welsh Parliament’s Culture, Welsh Language and Communications Committee’s inquiry on the 2021 Census

I write in response to the Culture, Welsh Language and Communications Committee’s call for evidence on the 2021 Census.

We are also responsible for the Census in England and Wales, with the next census to be carried out in 2021. In advance of appearing before the Committee in April to answer your questions, the below provides some initial information for consideration.

Question development for the 2021 Census started in June 2015 with the 2021 Census topic consultation, asking stakeholders for views on our initial thoughts on which topics we should ask questions on in the 2021 Census. 1095 stakeholders responded to the consultation indicating their need for data on different topics, expressing needs for information on new topics such as the Armed Forces community, sexual orientation and gender identity, and outlining areas where changes made could help better meet user needs. Following the topic consultation, we published topic-specific reports outlining our next steps, and developed testing plans to research the needs identified.

Further consultation has been held around topics where greater needs for change or development were identified. We have also held public events such as a series of roadshows (July 2016) and adhoc meetings with interested parties including All Party Parliamentary Groups, community groups and charities. Most recently, ONS held a stakeholder forum in London on 13 December 2017. At the forum, we discussed needs and research on the topics of gender identity, sexual orientation and ethnicity. We will be hosting another forum on 23 April in Cardiff to discuss the topic of ageing.

On 28 February, we launched a public consultation on 2021 Census Output content to help us understand what statistical products our users need from the 2021 Census outputs, and to help prioritise our future research. This is open for views until 23 May.

Achieving a successful census in Wales

ONS engages with Welsh users and stakeholders through a number of different channels to ensure that the needs of Welsh communities and users of statistics are fully represented and taken into account.

There are three main areas we have engaged on:

All three of these activities are covered by the Welsh Census Advisory Group (CAG). This is chaired by Glyn Jones, Chief Statistician for Wales, and includes stakeholders from other government departments, universities and non-profit data users. The group’s remit covers design and delivery issues as they relate to data production and data use. The CAG formally meets twice a year but members are regularly consulted and updated throughout the year between meetings.

At the last meeting of the CAG in January 2018, ONS updated the group on progress to date, and sought input from group members on topics, developments in geography and results of the 2017 Census test.  Most recently, group members have been invited to respond to the outputs consultation that we launched in February.

As well as engaging stakeholders through the CAG, in November 2017, ONS and the Welsh Government jointly hosted a ‘Welsh Language in the 2021 Census’ stakeholder event. Attendees included representatives from Welsh Councils, the Welsh Language Commissioner and Welsh Language interest groups. Presentations from ONS and the Welsh Government were followed by a Roundtable discussion on the Welsh language, which considered the format and routing of the questions, and allowed the group to consider how the data may be used, and potential limitations. Their views and feedback are being considered, alongside testing and evaluation results, to propose the recommendations for the 2021 Census. The group may be contacted again in the future for matters relating to Welsh language in the Census.

In addition to the CAG, we use the Census Liaison Operational Management Group (OMG) to address operational issues with ONS and its members which include Ceredigion and Cardiff County Councils.

Users from the Welsh Government recently expressed interest in the 2017 test results. The Welsh Statistical Liaison Committee and the Third Sector User Panel at Welsh Government were presented with this information last year. Work with the CAG has enabled us to build relationships with these groups, and has helped us understand the specific needs of the users that these groups represent.

More widely, as in 2011, we are currently undertaking programmes of work to engage at local authority level, and a census community engagement programme. To ensure we are able to engage with users effectively, we provide information and promotional materials in Welsh and are also developing a bilingual census logo.

The structure of the language questions was as follows:

• Welsh skills was collected only in Wales and the question space was left blank in England.
• Main language response options were slightly different in England and Wales, with the ‘English’ tick box in England replaced by ‘English or Welsh’ in Wales to capture both national languages in Wales. The Welsh language version reads ‘Cymraeg neu Saesneg’ (‘Welsh or English’) to reflect the version of the form chosen.
• The English proficiency question was identical in England and Wales.

During question testing, an option was tested where the main language response options ‘English or Welsh’ / ‘Cymraeg neu Saesneg’ was split into two separate tick boxes. Results of the testing
showed that respondents struggled to answer, particularly amongst the Welsh speaking community. Results of the research were shared with Welsh language stakeholders at the event held in
November 2017. The Welsh language stakeholders discussed the results and agreed as a group that the response option should not be split. They agreed that Welsh skills data would be best placed for monitoring the Welsh language.

The need for language sub-topics was identified in the 2021 Census topic consultation held in 2015. Some stakeholders did express an interest in first/second, ‘native’ or additional languages but the requests did not evidence a strong enough user need to pursue a change. Data quality was not raised as an issue following on from the 2011 Census. All work so far has largely focused on user need but further testing and user research is planned to finalise all of the question wording, particularly focused on the online census questionnaire. As a result of testing and feedback, we are proposing to use the same language questions from the 2011 Census in the 2021 Census.

The Office for National Statistics (ONS) is only responsible for the Census in England and Wales; the censuses in Scotland and Northern Ireland are devolved responsibilities and are carried out by
National Records of Scotland and the Northern Ireland Statistics and Research Agency. We work closely with the Devolved Administrations to ensure that results from each of the censuses are as
comparable as possible. Although detailed arrangements may vary, each country will follow the same basic procedures with the publication of initial proposals being followed by the required secondary legislation.

For England and Wales, the Census Act 1920 provides for a census to be taken, however each census can only be carried out following approval of secondary legislation – the Census Order (affirmative procedure) and Census Regulations (negative procedure), which set out the questions to be asked and the procedures for collecting the information. Welsh Ministers must be involved in respect of explicit consent to the order and laying of separate regulations in the Welsh Assembly.

Secondary legislation is preceded by a White Paper which traditionally sets out the proposed topics for inclusion in the census questionnaire and proposals for how the census will be conducted. The most significant changes this time being that the census will be predominantly online and the greater use of administrative data to pave a way to meet the Government’s ambition that censuses after 2021 are conducted more frequently, using existing data.

Updates on other topics

Many of the core issues about what to ask in the 2021 Census have already been determined through the topic consultation in 2015 and subsequent research since 2016. Testing has taken place in England and Wales, in both the English and Welsh language. The latest update, where a final proposition was reached, was our announcement that we will be proposing a question on Armed Forces veterans to provide information to help public authorities meet their obligations under the Armed Forces Covenant. This was followed by the 2021 Census topic research report in December 2017.

We have identified a clear need for improved information on sexual orientation and gender identity. This is especially in relation to policy development, service provision and fulfilling duties under the Equality Act 2010. Data on the Lesbian, Gay, Bisexual and Transgender (LGBT) population would provide evidence on the extent of inequalities, discrimination and disadvantage, which in turn would help to target and improve policy making, particularly in health services, education, employment, housing, social services and homophobic crime reduction services for LGBT groups.
We are still considering whether and how to collect information on gender identity, alongside continuing to collect information on male or female. This is particularly complex in meeting a respondent need for gender identity, a user need to measure the size of the trans population while ensuring an accurate estimate of the male and female population. Our research so far gives us confidence that collecting gender doesn’t have a negative impact on collecting information on male and female. We also know that there is a strong information need for separate information on the trans population.

Further testing is planned to refine the question design and inform our recommendation about the inclusion of such a question or questions in the 2021 Census. To be clear, we have never suggested that people would not be able to report themselves as male or female. We have and will continue to collect this vital information.

Users expressed a wide range of demands for data on ethnicity and religion. Based on user need, we have narrowed this down to four potential additional tick boxes to the question asked in 2011 –
Jewish, Roma, Sikh and Somali. We continue to engage with the relevant communities on the acceptability or otherwise of including such additional tick boxes. We are also undertaking further
research to assess whether the inclusion of new categories will collect sufficient quality information to meet the user need and that our conclusions are compliant with our legal obligations. A successful census test was carried out in 2017 including areas within Powys, to test the impact on response of including a sexual orientation question and to assess the new technologies and processes required to run a predominantly online census. We are planning for a rehearsal of around 100,000 households in 2019 before scaling up to 26 million households in 2021. The rehearsal will be run in both England and Wales.

ONS will make its recommendations to government on 2021 Census content later this year. Our recommendations will be based on our considerations around the evidence of user need, public
acceptability of proposed questions, and our ability to devise questions that collect good quality information to meet the user need and our legal obligations.

I look forward to answering your questions and elaborating on the above in April.

Annex A Examples of the 2011 Census form

The main language question is used to route respondents with the national language as their main language past the ‘English proficiency’ question. 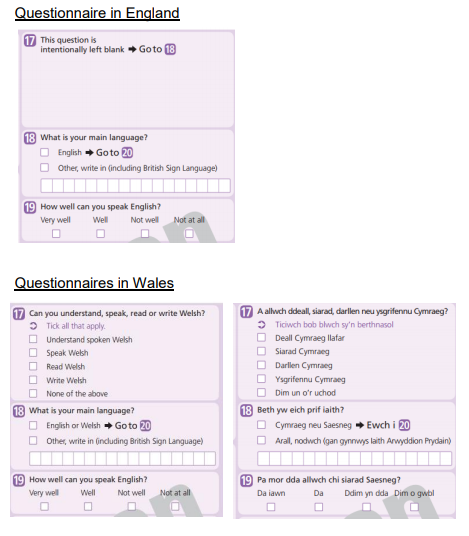 Office of National Statistics oral evidence to the Welsh Parliament’s Culture, Welsh Language and Communications Committee’s call for evidence on the 2021 Census. (April 2018)