This paper provides an update on the design of the household response profiles for the 2021 Census.

Members of the panel are invited to review the changes of the response profiles, that have been applied after the 2019 Rehearsal and incorporated into the development of the 2021 Wave of Contact.

Response profiles are a best estimate of the volume of responses we expect to receive during the census period. They are used to model when, where and how people are going to respond to the census, and they will be vital to inform operational decisions during the 2021 Census.

The response profiles have been used as an input to the Field Operation Simulation Model (FOS; Ward et al, 2019) used to make decisions about the number of field staff required in each area; when, where and how many reminder letters to send; and where to send paper questionnaires reminders.

The output from the FOS will be used during the live collection period by the Response Chasing Algorithm tool (RCA; Meirinhos, 2019a) as a basis for comparison against live return data, so that we can tell where we need to put in extra effort to meet our quality targets of 94% overall response and at least 80% response in every local authority.

Our aim is to build response profiles for returns by day, from the start of the census period until the end of the collection period. We aim to do this for each mode of response – online or paper. Our objective is that each Lower Super Output Area (LSOA) will have a response profile which is associated with its influential demographic variables and Hard-to-Count (HTC) rating (Dini, 2019a; 2019b).

Groups of LSOAs that have similar self-response profile shapes and demographics, will be clustered together (Meirinhos, 2019b). This means that by having a reduced number of response profiles, rather than 34,753 (the number of LSOAs) our maximising response strategies might be customised to the relevant demographics while making sure we are on target with the Census quality targets: 94% response, 80% minimum for each Local Authority and reduced variability.

We anticipate that a cumulative response profile for a paper first area might look like the graph in figure 1. The blue line shows the overall response. This is broken down to show the daily expected online (orange line) and paper (blue line) responses. 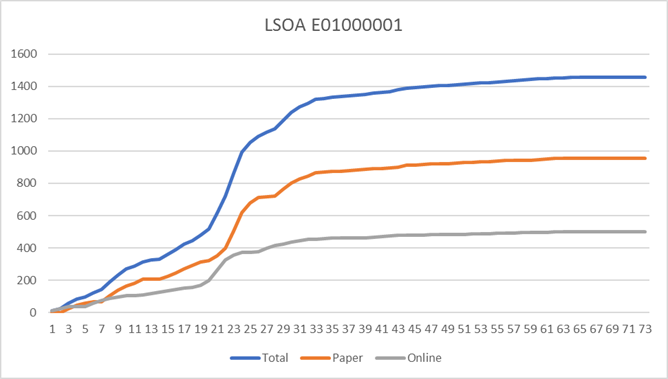 During the 2021 Census maximising response strategies will be implemented to increase census response according to the established targets (94% overall response, 75% online response and at least 80% response in every local authority; Fraser, 2019).

Research has been conducted by the Maximising Response team using the Field Operation Simulation (FOS) to evaluate how many field staff visits, reminder letters and paper questionnaires will be necessary to conduct a successful Census operation (Davis & Fraser, 2020).

Using the response profiles as the baseline response, the visit success rates and reminders efficacy from the 2017 test, the success contact rate from the Labour Force Survey (LFS) amongst many other parameters, it was possible to estimate the expected daily returns for all LSOAs across England and Wales during the next Census collection period. Moreover, the knowledge gathered from the 2017 Census Test provided enough support to estimate how many respondents will choose to submit their Census question online or using the traditional paper questionnaire.

Yet some challenges still persist. Results from the 2019 Rehearsal provide some evidence about the willingness of the E&W population to respond to a “voluntary” Census Rehearsal, as well as the actual online engagement from the population and the ability to reach a 75 % online response.

However, if the results from the rehearsal suggest that we will probably be able to achieve the 70% self-response there isn’t much evidence to draw conclusions around the patterns of response and especially around the peaks of response.

This is mostly related with the fact that both the 2017 test and the 2019 Rehearsal didn’t include a Census day and therefore the main peak of response happened over the first period of days after the initial contact has landed.

For the 2021 Census, the material accompanying the initial contact will include completion instructions similar to those of the 2011 material. It is logical to assume that, with these instructions, and with wider messaging about the timing of the census, the 2011 tendency for self-completion on or around census weekend will to a large extent be repeated in 2021.

Figure 2. Daily returns for England and Wales for 2021 Census 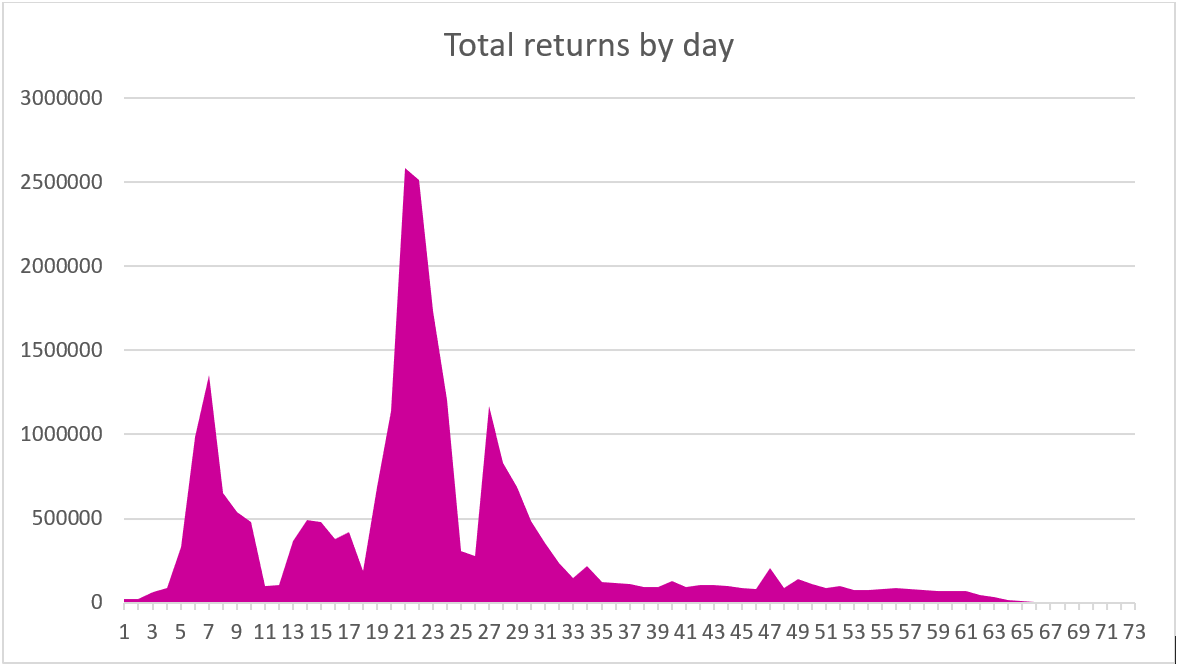 Despite this, an initial peak is still expected to happen during the early days of the operation. However, the volume of initial contacts means that these will be distributed over a 10-day period. This should flatten and draw out any early peak compared to the sharp initial peak in 2017 and 2019 when initials contacts all arrived in two days.

The present paper provides an update about the design of the response profiles following the 2019 Rehearsal and the implementation in the 2021 Wave of Contact. The paper focus on the rationale for the development and the implementation of the response profiles in the wave of contact supported by evidence gathered from the 2017 Test, the 2019 Rehearsal and previous Censuses.

Dini, E. (2019b) Update on methodology for the Digital domain of the

Hard to Count index for the 2021 Census, available https://uksa.statisticsauthority.gov.uk/wp-content/uploads/2020/07/EAP124-Hard-to-Count-index-methedology.pdf